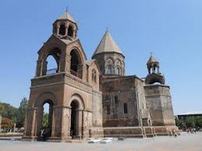 Holy Etchmiadzin The Mother See of Holy Etchmiadzin is the pre-eminent center of authority in the worldwide Armenian Apostolic Church.  The cathedral dates back to the 4th century, and is reckoned the oldest Christian cathedral in world. Although the current sanctuary was erected in the 1600s, remnants of the 4th-century altar have been unearthed beneath the present structure.

In its capacity as the residence of the Supreme Patriarch and Catholicos of All Armenians (the pontiff of the Armenian Church), Holy Etchmiadzin is known as the "Catholicate of All Armenians."  It became the seat of the Catholicate of the entire Armenian nation in the 4th century, following the conversion of King Tiridates III to Christianity by St. Gregory the Illuminator in AD 301.

According to the chronicler Agathangelos, soon after Armenia's conver­sion to Christianity, St. Gregory had a vision of the Son of God.  Appearing as a heroic figure of light surrounded by a mighty angelic host, Christ struck the ground with a golden ham­mer, indicating the place where the Mother Cathedral of the new Christian nation was to be established.  The name Etchmiadzin--literally, "where the Only Begotten descended"--refers to this episode.

Located near the capital of Yerevan in the Republic of Armenia, it is composed of:
- The Mother Cathedral of the entire Armenian Church;
- The monastery and monastic brotherhood;
- The residence of the Catholicos of All Armenians;
- Various religious and cultural institutions, such as the Kevorkian Theological Seminary and a museum

The man who initiated the conversion of Armenia was St. Gregory, called the "Enlightener" or "Illuminator" of Armenia. Gregory was the scion of a noble family and was educated in Caesarea, then a Christian center.  He entered the service of King Tiridates of Armenia and after much persecution succeeded in converting the King in ad 301.

Tiridates in turn helped Gregory to convert the whole country to Christianity.  In some regions this took place with relative ease; in others evangeli­zation met great resistance.  With the help of the King, Gregory destroyed the pagan sanctuaries and crushed the armed opposition of the pagan priests.  Paganism lingered, however, in the remote parts of the country.

Gregory was formally designated as the supreme head of the Church, and was sent to Caesarea to be ordained a bishop.  He thus became the first in an unbroken line of 131 catholicoi (or "universal bishops") of the Armenian Church.

Gregory was also instrumental in the conversion of the neighboring countries of Georgia and Albania.  He built the first Christian cathedral in Vagharshapat, near Mount Ararat, then the capital of Armenia.

Having accomplished his mission and advanced in age, Gregory relinquished the care of the Church to his second son, Aristakes, who already had been serving as his vicar gen­eral, and in that capacity had attended as a delegate of the Armenian Church the fa­mous Council of Nicea, in ad 325.  Gregory then retired from active life to live as a hermit until his death.

In time, the heathen gods disappeared and the profession of Christianity be­came general.  The fundamentals of the internal organization of the Church and its disci­pline were established.  Rituals and church services took definite form.  Aside from its moral and spiritual benefits, the adoption of Christianity helped to unite the various racial elements and divisions in Armenia, and forged them into a nation with a distinct identity.